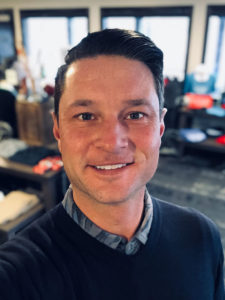 Kris was honored to be named the Head Golf Professional at Breezy Bend Country Club in 2015, after serving as their Associate Professional for the two seasons prior. With over 20 years of experience as a PGA professional

Kris was raised in Brandon, Mb and at the age of 13, along with a few close friends, became enthralled with the game of Golf. Over the following years he played in many junior tournaments, with good success, and worked at Deer Ridge Golf Course, where he learned the ropes in the Back Shop, Maintenance and Golf Shop departments.

Upon completion of high school Kris decided that the golf industry was the career path for him. He attended Lethbridge Community College from 1999-2002 and graduated with a 3-year business diploma with specialization in Golf Management. After finishing of his education, Kris turned professional and took his passion and enthusiasm to Heritage Pointe Golf Club, located just outside of Calgary, Ab. Kris worked at Heritage for three seasons as an Assistant Professional, there he began his journey as a golf coach and club fitter, greatly developed his business skills and learned the importance of being a true professional. During his time, Heritage Pointe was the first ever Canadian Golf Shop to be awarded Top 100 Golf Shops in North America.

In 2004, Kris became an Associate Professional at St. Charles Country Club and was excited to be back home to Manitoba. Kris spent nine seasons at St. Charles, where he learned a tremendous amount in areas such as teaching and coaching, club fitting, management and leadership, retail, marketing and merchandising. In his years at St. Charles, the club became the second Golf Shop in Canada to be awarded Top 100 Golf Shops in North America and also Top 30 Private Club Golf Shops in North America. Additionally, he was a key member of a team that hosted the LPGA’s CN Canadian Open at St. Charles. In 2005, Kris was awarded PGA of Manitoba’s Assistant Golf Professional of the Year.

Over the past 5 seasons as Head Golf Professional at Breezy Bend CC, Kris has worked to create friendly and inviting environment for members and their guests to learn and play golf, socialize and maybe do a little shopping! Kris has implemented many teaching and coaching programs at Breezy Bend, their ladies “Get Into Golf” program and Junior Golf Camps highlight some of these programs. The Ladies Day and Men’s Night events have seen a major resurgence and club event participation has been incredible. Over the past 5 season Kris and his amazing staff have been honored by winning 2018, 2019 PGA of MB Club Professional of the Year, 2016, 2017, 2018, 2019 PGA of MB Retailer of the Year and 2016 PGA of MB Teacher of the Year. Kris is currently the PGA of Manitoba President and has sat on the board for the past 10 years.

In his spare time, Kris enjoys spending time with his girls, Kaitlyn and Brooklyn, he loves puzzles and tries to stay active at every opportunity. He also loves to travel and meet new people.